The Book I FINALLY Read: The Velveteen Rabbit

I confess: until last Wednesday, November 2, 2011, I’d never read, from start to finish,
Margery Williams’ 1922 classic storybook The Velveteen Rabbit, Or How Toys Become Real.
Nor had anyone, while I was growing up, read it to me.

The above two facts got me wondering “Why?”
I certainly loved listening to stories. And once I learned to read to and for myself, I was pretty much always in the company of a book – a Golden Book, a Honey Bunch title, a fairy tale or a biography of a famous person’s childhood.
Was it because stuffed animals weren’t my thing? (Baby dolls and my very own Suzy Walker claimed much of my day’s play.) 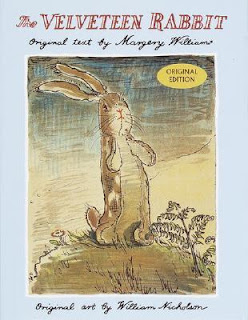 To maximize my first-time reading experience, I made sure to purchase and read the Original Edition, illustrated (beautifully) by William Nicholson and published in 1922 by Doubleday Books for Young Readers to instant success.
Of course, I knew of this beloved classic.
I recall my University of Pennsylvania Children’s Literature Professor Dr. Huus introducing the book, assuming all of us had read it.
There wasn’t a fifth grade class I taught in which at least one student didn’t name the book as his or her All-Time Favorite.
My writers, both young and once-young, wrote, write and will continue to write, anthropomorphic stories about inanimate toys, lovingly referencing the velveteen rabbit.
I knew the story’s oft-recited line: “When a child loves you for a long, long time, not just to play with but REALLY loves you, then you become Real.”
If quizzed, I could match William Nicholson’s cover, with its heart-grabbing bunny begging to be hugged, to Margery Williams’ title.
I nodded approvingly when reviewers compared the velveteen bunny to Kate DiCamillo’s china Edward Tulane.
The Velveteen Rabbit was the perfect name for baby stores, toy stores, children's dishware and clothing lines.

I simply hadn’t read the book from beginning to end.

“There was once a velveteen rabbit, and in the beginning he was really splendid. He was fat and bunchy, as a rabbit should be; his coat was spotted brown and white, he had real thread whiskers, and his ears were lined with pink sateen. On Christmas morning, when he sat wedged in the top of the Boy’s stocking, with a sprig of holly between his paws, the effect was charming.”

“But he never knew that it really was his own Bunny, come back to look at the child who had first helped him to be Real.”

Well, the Adult Reader in me teared up at the story’s Truths. Yes, indeedy, it does take a long time to become Real. And by the time you do, “most of your hair has been loved off, and your eyes drop out and you get loose in the joints and very shabby….but these things don’t matter.”
The illustrations so captured the rabbit’s innocence, ingenuousness, his sense of wonder, his sense of delight. I worried, I cheered, I gasped then sighed. The velveteen rabbit had become a Real Rabbit at last.
One story element that didn’t sit well with me, though?  The appearance of the nursery magic Fairy. The wonders she worked left me shaking my head, and not in a good way. 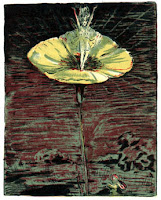 The Writer in me so admired the old-fashioned telling, the lovely language and how Williams built the story across first Christmas, then Spring, then Summer, then the Anxious Times. There was a recognizable sentiment – for the youngest of listeners, for the oldest of readers, and a loveable character who kept me turning the pages. Much of Williams’ language suited the young, accommodating their sensibilities and concrete intelligence. No wonder the book remains a best-seller today and like a true classic, sold well for the past 89 years. Researching Williams’ life, I learned of her father’s death when she was only 7 and how many of her books explored this life-long issue.
Again, though?  The nursery magic Fairy left me cold. I like Happy Ever After endings just as much as the next writer/reader, but the Fairy-driven resolution was too easy.  Or maybe it was how she appeared, from within a flower that bloomed from the rabbit's tear.  Did the Writer in me see a need for fore-shadowing?

As for that Long-ago Child who lives inside me, she shared she was hooked from the get-go, whether she'd played with stuffed animals or not. She seconded everything the Adult Reader liked and best of all, loved Nicholson’s illustrations.
The nursery magic Fairy apparently wasn’t a problem.  In fact, she whispered, “Everything about her was perfect."

If you’d like to read Margery Williams’ The Velveteen Rabbit, again or for the first time, click here.