First, don’t forget!
TeachingAuthors is celebrating its THIRD Blogiversary by offering readers the chance to win one of three $30 gift certificates from Biblio!


And second,
as promised,
I present pictures and poetry from my Wednesday, April 25 visit to Gombert Elementary School in Aurora, IL.

Thanks to the focused efforts of the K-5’s Library Media Center Director Gayl Dasher Smith, the participation of engaged, prepared and oh, so smart 3rd, 4th and 5th graders and the support and curriculum-connected contributions of the teachers and administrators, I had One Swell Day – the kind of day that forced me to re-consider, while training home on the 4:33 pm Metra, my long-ago decision to leave classroom teaching. 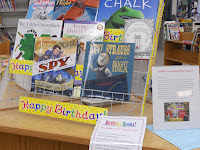 
I loved the Library display of Author Birthdays and the school’s Birthday Book Club.


The fourth grade political posters, promoting favorite book characters for President, were beyond clever, not to mention a breath of fresh air. 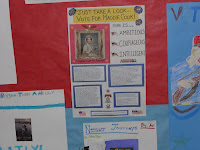 An added plus?
I worked with each of the three fourth grade classes, helping them create their Illinois ABC books.
Even though I’d written a book or two about Illinois, Gombert’s Young Writers and learned researchers of the Prairie State gave me a whole new way of looking at the Land of Lincoln.


White-Tailed Deer (by Charlie)
In 1980, Illinois children chose the


With a white bushy tail
A familiar sight on the


The Great Chicago Fire  (by Priya)


Fire, hot, blazing, red
Spreading like a cheetah in search of prey.


Burning down houses with a big commotion.
Trees rumbled…


In the end, everything was soot!


I fought in World War II
A war as dangerous as

The depths of a deadly cavern.


I piloted Navy planes
As bombs turned the world to ash.


Humbly, I accepted the Congressional
Medal of Honor.


I’ll always think of those who died.
Thank you, Chicago!


Forevermore I will be remembered
As planes soar into the air.