Replay of "Wrestling with Voice"


Hello, Readers! Carmela here with a quick announcement. Today would normally be Mary Ann Rodman's turn to post. However, she is taking a blogging break. We hope she'll be able to return soon. Meanwhile, we've lined up a terrific new "voice" to join us. I'll post an official welcome to her in a few weeks. For today, since we've been discussing Voice as the third of the Six Traits of Writing, I'm providing you with an excerpt from Mary Ann's post, "Wrestling with Voice," which she published back in March 2010.

So now, I turn the microphone over to Mary Ann. Enjoy! 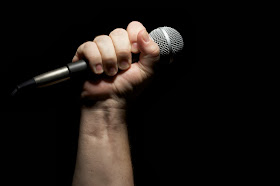 Trying to define “voice” in writing is like trying to define “air” (the invisible stuff you breathe) or “love”( an emotion that makes you act stupid). After much hairpulling and consulting a bunch of writing manuals, I think I have a definition.

Writing is what you say, and how you say it. Voice is the “how you say it” part. The term can be used in different ways. One is the writer’s voice. Since I am not a literature scholar, I’m not going to try analyzing writer’s voice, within the confines of a blog post!

A more manageable topic is character voice. In this context, “voice” consists of the vocabulary, speech pattern and tone used by the individuals. Think of some memorable fictional figures. Could you ever confuse Jane Eyre with Scarlett O’Hara? Huck Finn with Holden Caulfield? Ramona Quimby with Laura Ingalls? Is there another literary child who sounds even remotely like Eloise? Each of them speak and think in a way that is completely their own.

What influences character voice? The character's gender, age, setting, cultural background, education, family, economic status, occupation and on and on. Taking these factors into consideration, even persons who share some these aspects will still sound unique. Huck Finn and Holden Caulfield are both teenage boys. The uneducated, resourceful and adventuresome Huck, narrates in the dialect of a 19th century Mississippi River “rat.” Holden, immature and introspective, uses repetition, slang and fairly limited vocabulary, that reflects his isolated, upper-middle class, Post-World-War-II American prep school life.

Even characters who may share many of the same characteristics, should be distinguishable from one another. One of the best examples of this is Rachel Vail’s Daring to Be Abigail. The story takes place in a camp cabin of 11-year-old girls who at first glance, seem to share exactly the same background. Within two pages, the reader knows each of the eight main characters as separate entities. I have read this book over and over, trying to figure out how she established characterization through voice so rapidly, without resorting to stereotype. I’m still reading!

My students sometimes have trouble creating distinct character voices. For instance, a conversation between two ten-year-old boys, whose dialog could be interchangeable, because they speak exactly alike. When I ask the writer to tell me about these characters…who is their BFF? what’s in their school backpack? what is their least favorite school subject? …the answer is often “I don’t know.” The problem is that the student is trying to write about characters they don’t really “know”.

My characters live in my head for years and years before I get around to bringing them to life. I keep notebooks, computer files and file folders on future characters, as they "share" with me such diverse information as their favorite baseball player, what their side of a shared dresser top looks like, how they feel about various family members. Sometimes I learn more about my characters through the writing process, but I would never presume to tell their stories without having at least a working knowledge of them.

written by Mary Ann Rodman
Carmela Martino at 7:00 AM
Share