Voice and a Voice Poem

Today, I’m kicking off a new series of posts on voice, the third of the Six Traits of Writing. We addressed the first trait, ideas, in a series of posts that Carmela kicked off. Our series on the second trait, organization, began with Jeanne Marie’s post. Visit them if you'd like to catch up.
On to voice!
Discussions about voice often include vague statements like “I’ll know it when I see it.” But voice is not really so hard to explain. Just as we each have a unique speaking voice, we each have a writer’s voice that is all our own.
Your writer’s voice develops over time, both from being yourself and from making a conscious effort to express your thoughts in new ways. Your ideas and the words you use to describe them come from your own unique experience and perspective. Your writer’s voice shows your personality through point of view, word choice, and language patterns, including rhythm and rhyme.
A character’s voice is not necessarily the same as the author’s voice. If it were, all our characters would sound the same.
It’s Poetry Friday, so I’m adding a voice poem I wrote (in my writer’s voice) about the voice of a character who might be me. You decide. 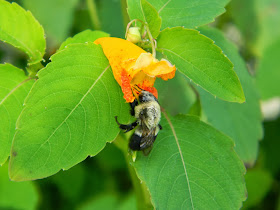 I Have a Voice

I have a voice.
My voice is mine.
And when the creeping tendrils twine
around the everblossom vine,
I’ll whisper in the darkest night.
I’ll shout out loud in broad daylight:

I have a voice.
My voice is mine.
I’ll buzz with fuzzy bumblebees.
I’ll chirp with chickadee-dee-dees.
I’ll sing until the stars all freeze:

I have a voice.
It’s mine alone.
I’ll laugh when I am on my own.
I’ll share with wild unruly bears,
elephants and dogs and hares,
even if nobody cares.
I’m generous that way.

I have a lot to say.

Today’s Poetry Friday Roundup is at No Water River. Enjoy!