And the hits keep on a-comin'!

A writer puts her/his heart and soul into crafting a picture book story. Over a period of weeks or months, she sweats and strains to get every little element exactly right. Finally, it's ready. The main character is enormously appealing. The language sings. The storyline crackles. Not one word is unnecessary or out of place.

She sends it off, and ... an editor agrees. Woo-hoo! Break out the bubbly!

A fabulous illustrator brings the story to exquisite life. The writer can't believe her luck. Flash forward two or three (or five) years, and she's holding her story – this perfect story – in her hands, a picture book at last.

Then ... more good news. Glowing reviews. STARS. Additional printings. Big sales. Her book soon grows more popular than she dared to dream it could, and then ...

Her editor asks for a sequel. I imagine this request elicits astonishment and elation (and perhaps the eensiest shiver of terror).

To find out, I asked three of them I admire. Here's what they had to say.

"I hope I succeed in meeting all my goals for Calvin, Look Out! Only time and my wonderful young readers will tell."

Bonny Becker, on writing A Library Book for Bear (illustrated by Kady MacDonald Denton) and other sequels to A Visitor for Bear (Candlewick Press, 2008): 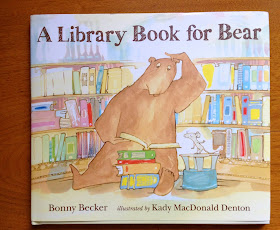 "The biggest challenge without question is the problem of keeping the stories fresh. It's easy to think of situations that will frustrate Bear, but I don't want the escalation of the problem or the resolution to be too predictable. And I've tried to subtly move Bear's story along. His friendship with Mouse deepens and he's slowly coming out of his shell--in a way. At least, in the latest book, A LIBRARY BOOK FOR BEAR, Bear finally gets out of his house and there are actually other creatures in his world that he interacts with.

"Each sequel is easier in some ways and harder in others. I know these characters and their world better with each story, but, as mentioned, coming up with fresh situations and reactions doesn't get easier! It's also tempting to get lazy about it all--not work as hard for fresh language and gestures and such. So I work hard to reference back to earlier books--for example, Bear uses the skates he got in A BIRTHDAY FOR BEAR to get to the library and the humor works better if you know that Bear always ends up shouting--but I also want each book to be strong on its own.” 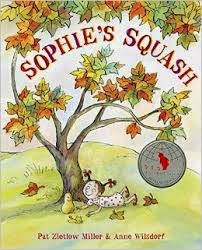 "My biggest challenge was that I had never imagined Sophie having a sequel. So I really had to start from scratch and ponder what she might do next.

"Plus, Sophie's Squash had been so well received that I felt a certain amount of pressure to do an equally good job. I hadn't ever felt that pressure before because I'd always written without anyone expecting it and waiting to see what I'd done.

"So writing Sophie's Seeds took longer and was a bit more painful, but I'm very happy with where we ended up and that Sophie got to have another adventure."

Count me among the biggest fans of Calvin, Bear & Mouse, and Sophie. Here's to their continuing stories. *clink*

Jill Esbaum
P.S.  You can now find me on Twitter @JEsbaum