Thank you so much for joining us, Sandy! Would you share a favorite writing exercise for our readers?

Since Odin’s Promise released, I’ve heard two comments most often. One reflects appreciation of the fact that characters, particularly the German soldiers, are not treated as caricatures or stereotypes. This wasn’t a conscious decision or my original intent, but my research made it clear that there were wide and varied motivations and reactions among the Norwegians and the occupiers. Surface behaviors were not necessarily indicators of genuine feelings. While the overt story may have been “good Guys VS. Bad Guys” the SUBTEXT reveals more complex dynamics at work.

I’ll suggest a favorite exercise that helps in reading AND writing with an increased awareness of SUBTEXT. I first read about SUBTEXT STRATEGY exercises in an article and later in a book created by developer Jean Anne Clyde and co-authors Barber, Hogue, and Wasz: BREAKTHROUGH TO MEANING: Helping Your Kids Become Better Readers, Writers, and Thinkers.

Here’s one strategy I use: Think of a crime drama or other dramatic series that is familiar to all. A full page print advertisement works well, too. Suggest a scene with simple dialogue (better yet, play a short YouTube clip like this one which does some of the work for you!)

Then quickly survey: “What was _________ really thinking when s/he said that?”  “How could you tell? (Body language? Earlier actions? Facial expression? Previous experience with the character?) 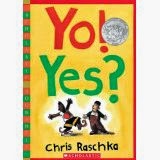 Since I advocate the use of picture books for all ages as compact, concise and compelling tools for sophisticated lessons, here’s one of my favorite activities: Share Chris Raschka’s picture book Yo! Yes? by reading aloud or sharing the YouTube video.

Working through the brief text page by page, discuss what each character is REALLY saying (and thinking) as he speaks; then explore the other’s reaction.

It’s likely not all will “read” the subtext identically. Some may “read” anxiety, others hostility, still others shyness or confusion, depending on their preconceptions. Keep in mind the words on the page are identical for all.

Once the story has been thoroughly explored, challenge writers to compose a story passage from a full double-page spread (or the whole story, if there’s time) with the dialogue restricted to the original text. Narration alone must do the important work of the illustrations. The finished piece should suggest the subtext but still allow for some interpretation among different readers. This might be conveyed by body postures, gestures, expressions, actions, tone of voice, etc.

If working in a group of three, two can reenact a portion of the story, replaying sections to allow full discussion. A recorder helps the team generate the best way to describe, phrase, and imply the emotions and attitudes intended without stating them outright. The finished text is then read aloud and enacted by the players, comparing to the original impact of the illustrated pages.

This exercise can be adapted to reveal underlayers of character personalities before writing:  If you know your story will have two teen boys, a mother, a younger sister, and a crabby old neighbor, imagine their responses to a single page color advertisement--perhaps a lingerie ad. Develop an internal script for each character’s thoughts when viewing the same ad. Is the crabby old neighbor a lecherous man or does he think about his wife deteriorating with Alzheimer's and remember how she looked on her wedding night? Does the mother worry about her son being hounded by aggressive young girls, or worry that he doesn’t even seem interested in girls, but his friend is drooling? Does the young girl have body image issues suggesting early anorexia, or does she disdain such images because she’s 100% tomboy?

Your interpretation of your characters’ responses might reshape your own story and its development.

As for that other frequent comment? Readers ask when they can expect the sequel so they can find out what happens next to Mari and her family. Odin’s Promise was written as a stand-alone title, but apparently there is enough subtext to generate emotional investment in my characters, which is the best compliment I could wish for. Research is well underway, with fingers crossed that this won’t be a thirty-year process.

Thank you again, Sandy!
Readers, be sure to enter the book giveaway! The deadline is August 23.