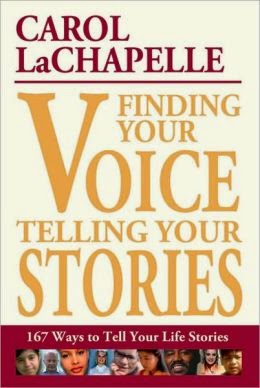 When it comes to teaching Memoir Writing, Carol is “it”!
And so is her book, FINDING YOUR VOICE AND TELLING YOUR STORIES: 167 WAYS TO TELL YOUR LIFE STORIES (Marion Street Press).


Carol believes each life contains the makings of a memoir.


In FINDING YOUR VOICE, she shares writing tools, tricks of the trade, exercises and prompts to help any writer access and explore memories and turn them into stories.


Carol also includes contributions from real students who have been using her methods to show readers how productive the writing exercises can be.


You can read Carol’s most recent essays in Next Avenue  and in America Magazine.

Carol invites TeachingAuthors readers to visit her blog  ForBoomersandBeyonders - Dispatches From the(New) Middle Ages and/or to “friend” her on Facebook.


You can email her directly for information about her online writing workshops at madmoon55@hotmail.com.


Thank you, Carol, for sharing one of your 167 ways for our TeachingAuthors readers to find their voice and tell their stories.


In addition to writing and teaching workshops, I also consult with private clients on their various writing projects.  Recently, one of them, a woman in her late 70s who is writing a series of family stories, sent me a remembrance of her beloved grandmother to read and critique.


In the piece, Joan writes about her many experiences with her grandmother from when she was a young girl.  As I read it, I realized that I didn’t really understand what was so special about “Gram,” though I knew Joan felt there were many things, else why commit this woman to paper?


And so after marking up the draft—mostly with questions—I summed up my comments at the end, including suggestions for the next revision, then sent it back to Joan along with this note.


I definitely like this idea for a family story; it’s important for future generations to know the people who went before them.


I hope my notes, especially on the last page, will help in your revision. The major thing when starting to revise is to list for yourself those 2-4 most important characteristics/personality traits of your grandmother, as you experienced them.


ou don’t necessarily have to then list these traits in the actual revision, but you want the story—the specific experiences/details/scenes—to illustrate those. In other words, here’s the evidence that supports why you believe Gram is someone worth writing about.


I also referred Joan to my book, particularly Chapter Two, “Four Really Helpful Writing Techniques.”  The fourth technique, the Character Sketch, describes how I came to write one particular memory of a high school teacher, including the process by which that memory emerged on the blank page.


I felt this might be helpful to Joan as she attempted to more specifically capture what was essential about her grandmother.

Following is that technique, which I have copied directly from my book’s initial manuscript.  I hope it will serve as a good reminder for all of us—new and practicing writers alike—when we come to write about the very special people in our own lives.


4.  Character Sketch:  When you use the character sketch technique, you do more than simply describe someone physically.  That’s important of course as s/he will come more alive on the page the better that you—and your intended reader—can see what that person looks like, sounds like, moves like.


But a character sketch becomes more interesting when you add the person’s relevant personality traits and significant biographical information.


For instance, if I were to do a character sketch of one of my favorite high school teachers, I’d include her height (short), athletic skill (she was our phys ed teacher), and coloring (her small, olive-dark face).  I’d also mention how young she was, and how demanding she was of us.  I’d describe how she looked while bouncing down the school halls (even when not wearing tennis shoes), gesticulating wildly alongside her friend and colleague, a much taller, paler, and mellower teacher.  Oh, and I guess I would mention that she was a nun who dressed in the black and white habit of her religious community—both in the gym and out.


I’d include relevant biographical information—a matter of keen interest among her former students, especially her decision to leave the convent after 20 years, marry a much younger man, sail around the world with him for a year, then return home and open a pizza parlor.


As I sit here now and write about the former Sister Joseph, more images of her come to mind, each small detail leading to another, and another, and then finally to a specific scene:

It is 1958 and our girls volleyball team has gathered in the gym after school for volleyball practice.  As we fumble our way around the court, Sr. Joe paces up and down the sidelines, barking orders at us, her black veil tied behind her back with a fat rubber band, the dour nun shoes exchanged for bright white tennies.  Her diminishing patience at our ineptitude now exhausted, she charges onto the court and to the spike position of my team.  Pushing aside Loretta, our best player, she yells “Set me up!” to the quaking girl next to her.  The rest of us stand there still as stones, and watch as Sr. Joe rises like some fiery rocket and hammers that ball over the net.


Not long after my book was published in July 2008, I received a very surprising email from one of its readers.  Here’s how it begins:


Dear Ms. LaChapelle,
I am the "much younger man" to whom you refer on page 33 of your new book who married your former volleyball coach. I want to tell you that I (and she) nearly fell on the floor reading that recollection. While some of the details were slightly off, the essence of Sr. Joseph was right on.
Esther Hershenhorn at 7:00 AM
Share