13 Ways of Looking at Plotting ~ and Happy Poetry Friday!

In TeachingAuthors' opening round for 2015, we are each asking ourselves, "What Are We 'Plotting' for 2015?"

Mary Ann started us out, sharing how she does or does not plot."Planning and plotting are not the same thing," she writes. "Plotting is knowing what happens first, then next, then next and at the end. I never know more than one of those things before I start writing.  I've stopped worrying about it."

Thank you, Mary Ann. I haven't a clue how to plot.  When I sit down to write, I'm never sure if I'm starting a poem, a song, a verse novel or a picture book.  I might be inspired by a color or a phrase from the news. Of course I know that everyone doesn't plot their stories methodically, but it's great relief to be reminded of this!

We are each snowflakes in the way we approach writing and life; and beyond this, I think that we are different from moment to moment, year to year, in crisis and celebration.

For example, until recently, I would say I'm fairly disciplined.  I've been writing a poem every day since April 1, 2010 (1,743 poems), I brawl with L.A. traffic every two weeks to meet with my marvelous critique group, I write in amiable silence with three or four other writers weekly, and I have a goal or two tucked away in my writer's smock--a couple of picture books, a novel in verse, a collection of poetry, a Pulitzer Prize.

But when my mother began to fade, particularly this last year, it was all I could do to hold onto my writer's smock.  Why? Partly because of the increased responsibility, and partly because of the foggy lethargy which set in.
There is so much to do, now that Mom has died.  So, I've stopped attending my critique group, stopped writing books, stopped meeting with other authors at my friend's sunny kitchen table.

I still write a poem a day, though.

Well, writing a poem a day.  But beyond that?  I haven't a clue.

I'm reading Loving Grief by Paul Bennett, a book in brief chapters, each of which ends in a poem, written after the death of his wife.  In the chapter, Coming to a Stop, he writes that the three times over a period of months his legs would no longer carry him forward.  He stopped. On a street, in an airport, on a hiking trail.  Later, he wrote, "those incidents of coming to a stop, those moments of stillness, struck me as early invitations from deep within myself to start new."

Here is the poem which ends that chapter:

Well. I was going to post the poem, until I read the copyright page (oops) which states that I cannot post it without permission.  So I won't.

What I will do is to post my own poem about stopping in my life.  Please note that each person experiences a death uniquely. I don't feel as if I'm in deep grief right now. Still:

STOPPING BY THE WOODS
by April Halprin Wayland

No snow.
No woods.

But I pause.
To hear the hawk.
To breathe my breath.
To hold this stone.

I think I'm listening for the music to cue my next step. 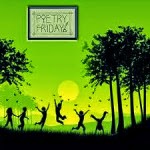 (So...the title of this blog?  You were expecting a parody of
Thirteen Ways of Looking at a Blackbird?)