As April Halprin Wayland reminded us, sometimes mistakes are masterpieces waiting to happen, that there is a “magical transformation from blunder to wonder.”

We continue to celebrate The Beautiful Oops Day! 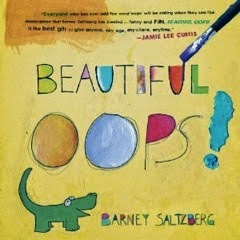 The transition from blunder to wonder can be challenging. As psychologist Kristi DeName   suggested, whenever we experience transitions, we are letting go of Some Thing. These transitions are defined by loss. Some losses are profound: a marriage, a home, a friend, a pet, a job. Some are less profound, as we let go of habits or objects, or an idea. But all change is scary because all loss is scary. It is unsettling, overwhelming, disappointing, and confusing.


Adapting to change forces us to gain perspective. We are forced to re-examine our lives and our choices… and our options.

As you know, I’ve long studied American folklore and history. I graduated from Vermont with a four-book contract for picture books that highlighted my love of American folklore and history. But, as much as I knew about writing and story, I knew nothing of the business of children’s publishing. That was my blunder, followed quickly by another: I signed on with the first agent who would help me with the multi-contracts. While this agent helped seal the deal with the contracts, issues arose. Needless to say, that relationship didn’t work out. I was referred to another agent, and more problems arose. It turned out that the contracts contained a couple of damaging clauses. According to this second agent, I couldn’t submit work elsewhere, and she couldn’t renegotiate the clauses. In other words, my career was not only stalled, it was completely derailed.


My first two picture books came out in 2009, eight years after signing the contract. The third book came out in 2012, eleven years after signing the contract. The fourth contract, however, was cancelled. Determined, I went to Author’s Guild, learned what I had to in order to understand these clauses, and then I renegotiated the particular clauses myself.


But there was yet another, stronger riptide I had to steer through. Beginning in 2001, the children’s market was changing dramatically. The folklore picture book market was bottoming out. The very genre that I had studied, loved, and sought as my career was no longer an option. Talk about a bumpy ride! My friend Eric Kimmel said I should write middle grade books.


Middle grade novels? I liked reading middle grade novels, but I had never considered writing them. How was I going to combine all that I had learned and loved in folklore and history with this new format? Was it even possible in a market that no longer viewed folklore as relevant? Historical fiction was having an equally hard time in the market.

What do I do now?


Not only do writers have to adapt to the shifting markets, sometimes we have to make our own place in it. And there’s the wonder of it!! As my wonderful new agent, Karen Grencik, said “As long as you are writing what’s in your heart and doing the best you can…” Finally, twelve years after I graduated from Vermont College, Karen sold my first middle-grade novel Big River’s Daughter to Holiday House. Three months after that, she sold my second middle grade novel, Girls of Gettysburg, also to Holiday House. All things happen for a reason at the time they are supposed to happen. As River and Tiger plunged into the wilds of the frontier, taking on the Pirates Laffite and the extraordinary landscape of the mighty Mississippi River in the rough-and-tumble Big River’s Daughter, there is that truth of River’s journey: if one perseveres, life can be full of possible imaginations.

“This here story is all true, as near as I can recollect. It ain’t a prettified story. Life as a river rat is stomping hard, and don’t I know it. It’s life wild and wooly, a real rough and tumble. But like Da said, life on the big river is full of possible imaginations. And we river rats, we aim to see it through in our own way. That’s the honest truth of it.” River Fillian, Big River’s Daughter


Don’t forget about our giveaway, featuring an autographed copy of Sherry Shahan’s YA novel, Skin and Bones!