(Carmela, here. While you'll see my byline under this post title on our website, the following was written by Mary Ann.)

Giving birth to a 400-page first draft was a lot more work than giving birth to an eight-pound daughter. (OK…she was a planned C-section, but still…) Just as your “real” work as a parent begins at the end of nine months of gestation, the serious work of revision begins when you have spilled your original vision on the page for months and months. 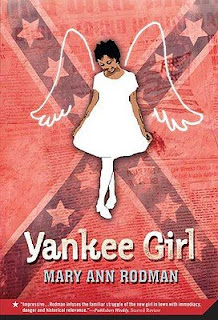 I wrote the first draft of YANKEE GIRL (Farrar, Straus and Giroux) during a year in the Vermont College MFA Writing program. Happy was the day I popped that pile of paper in the mail to my new advisor. My previous two mentors had focused on grinding out that draft.  No one had really discussed “revision” because “it wasn’t time yet.”  I couldn’t imagine how much revision that could be.  I had 400 pages.  Well, maybe it was a little long…

“This little baby needs to lose some weight,” said my new mentor, strumming his fingers atop my proud effort. Gee, that is a pretty tall manuscript I thought.

My mentor turned to the last page.  “Four hundred pages,” he said.  “I think it needs to be half this size. Let’s shoot for losing two hundred pages.”

What?? How was I supposed to do that? It was like being told to lose half your body weight, when you thought maybe you had twenty pounds to lose.

“Go back through this and cut every character, scene and description that does not move this book to its logical conclusion.”

Now was the time to listen to my Inner Critic.  Inner Critics can be a pain in the laptop during a first draft.  I had mostly told mine to shut up and get lost. If I hadn’t, I would never have gotten that draft done. If I was in a plot hole, I would write my way out of it.  But that method of getting past writer’s block left me with characters that appeared and disappeared, scenes that didn’t “move the story along” and my favorite fault, detouring up dead-end alleys and cul-de-sacs of description.

I love to write description. In re-reading that first draft though, I had forgotten how much I dislike reading paragraph after paragraph of anyone’s descriptions, let alone my own.

At this point, I didn’t know there would be at least four more revision drafts to come. I just needed to get through this one.  Step one…reading through the whole manuscript without changing anything. If something struck me as needing change, I flagged it and read on. I did not begin to cut (and cut) until after I had finished that first reading.

Once something strikes me as unnecessary or not working, I usually know what to do when I reach the pick-and-shovel stage of revision. If I don’t, I flag it again and leave it for my next pass. Relieving the pressure to fix everything right then and there, kept me going.

After not having read the ms for about six weeks, it was easier to see what my mentor had meant about it being “overweight.” (Digression: Never revise as soon as you finish that first draft.  Give it and you time to “breathe.”)  If I was unsure if something was “deadwood” (usually a description I just loved), I asked myself “If I had to pay a thousand dollars to keep this in the story, would I?” The answer was always no.  Chopping out those beloved bits is known as “killing the darlings”…passages that serve no purpose but you think you might be able to sneak them past your Inner Critic. Listen to Inner Critic, because you will only have to do it later when your editor (or mentor or critique group) points out the lingering “darling.”

Six months later, when it was time to change mentors, I had a slimmer manuscript.  It wasn’t quite the two hundred pages my mentor had envisioned, but it was one hundred fifty pages lighter.  I’d learned to enjoy revision, replacing the almost right word, with the exactly right word.  I combined or cut characters. I got a feel for pacing the action.

It’s a good thing I did, because there would be many more revisions to come.

Best of luck with however many revisions it takes.