The Six Little Words That Tell My Story

Six, coincidentally, is the Magic Number for our current TeachingAuthor theme.
Six, as in, “six-word memoirs,” created by Smith Magazine a ways back and first introduced to our readers in Carmela Martino’s August 12, 2009 post.
April’s fearlessly-written Friday post is a Keeper.  I’ve ear-marked it for those times I feel my courage shrinking.

Thanks to Carmela’s 2009 post, I already own a six-word memoir: “Non-stop finder of Life’s Silver Linings.”
I’d thought long and hard to determine and capture my essence.
That was me then.  No if’s, and's or but's.

The question now, though: do those thoughtfully-chosen words STILL serve my story?

After weeks of reflection, my answer is “You betcha!”

While Happy Endings are my favorites, Life, I eventually discovered, is not all goodness and light. Clouds do gather and build, obliterating our sky-blue vistas. Often those clouds darken, and more times than we wish, they claim a spot smack above us, refusing to move on for very long periods of time!
What keeps me keepin’ on – personally, professionally, spiritually, even politically - is something else I also eventually discovered: those proverbial Silver Linings of song and breezy sayings will - in time - identify themselves.
The “H” in my ESTHER Name Poem stands for “hopeful.” 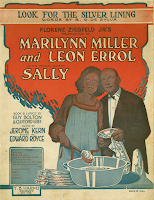 Maybe my hopefulness is astrological.  I’m a Sagittarian.
Or maybe it’s in my DNA.  (My blood type is BePositive.)
As we all know, I’m a Cubs Fan who believes “someday” is today.
But this very blog’s descriptive phrase in apposition – TeachingAuthor – embraces Hope!  My fellow bloggers and I work to help writers discover and grow their stories so their readers can do the same.

In Mary Schmich’s CHICAGO TRIBUNE column yesterday, she attempts to distinguish “Hope” from its most common synonym “Optimism.”  She drew the distinction that “Hope” was a “fluttery thing, that pretty flower that springs spontaneously from the dirt, no gardening skills required.”  Whereas she saw “Optimism” as “hard.  It can take work.  It demands focus in the face of contradiction,” she wrote.  “It’s a habit of mind, and like all habits it can be difficult to cultivate, easy to lose.”
Optimists must discipline themselves, she advises, to look up and forward, not down and back.

I’m the first to admit: Silver Linings excel at playing Hide-and-Seek.  Sometimes they won’t show their shiny selves until their mother clouds are miles (or even years) down the road.
What keeps me going is knowing (1) they are there and (2) they’ll surprise me, in a positive life-changing way.

In HOPE IN THE DARK (UNTOLD HISTORIES, WILD POSSIBILITIES), Rebecca Solnit writes,
“The moment passed long ago, but despair, defeatism, cynicism, and the amnesia and assumptions from which they often arise have not dispersed, even as the most wildly, unimaginably magnificent things came to pass.
Often..you need to wait until the cloud has passed…before you catch sight of the silver lining…” 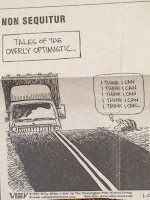 Yes, there are and will always be those times I am overly hopeful, overly optimistic. (The “E” in my ESTHER Name Poem stands for “enthusiastic.”)
This yellowed cartoon has lived inside my wallet since 1999.
Still, I’m on the hunt, non-stop, finding Life’s silver linings.
I’m keepin’ my six-word handle because it keeps me keepin’ on.

P.S.
If you’re eager to write your Six-Word Memoir, click here for this Oldie-But-Goodie Wednesday Writing Workout.
Esther Hershenhorn at 7:00 AM
Share