My Favorite Children’s Books of 2017: Rx for Courage! 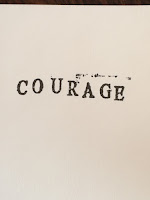 1.n. quality of being brave: the ability to face danger,
difficulty, uncertainty or pain without being
overcome by fear or being deflected.

Children’s books do Important Work. They help readers make sense of their world.
These past 338 days, though?  They’ve been working overtime.
L. Frank Baum’s Cowardly Lion is not alone.
The Good News is:  children’s books are gloriously succeeding.

My four favorite children’s books of 2017 are proof.  Each en-couraged me – both as a reader and a writer - to not only take heart, which is the root of the word “encourage,” but to bounce back and keep on keepin’ on so I could tell my stories and help others do the same. 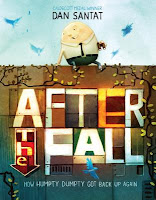 Caldecott medalist Dan Santat’s picture book AFTER THE FALL
(Roaring Brook Press) should be required reading for every human being, no matter his or her age.  We all need to know how Humpty Dumpty (who was “sort of famous” for falling) got back up again, and even better, reached new heights.
As important, Dan Santat’s interview on ALL THE WONDERS should be required listening for storytellers. I laud his honesty in sharing this picture book’s personal inspiration – i.e. his story and his wife’s as well.  It reaffirmed Marian Dane Bauer’s advice that we need to put – our – story into the story we’re telling if our story is to resound in our readers’ hearts.

Erin Entrada Kelly’s middle grade novel HELLO, UNIVERSE (Greenwillow/HarperCollins) gifted me with 4 unforgettable “misfits” – Virgil Salinas, Valencia Somerset and Kaori Tanaka + the bully Chet Bullens – who found each other and themselves.  Each showed me the need to be open to the world’s surprises and thus say “hello” when we want to say “good riddance.”
Click here to see how a fan of this book was prompted to create the hashtag #you will be found.
I’ve been a fan of this author and her beautifully-crafted stories since reading  BLACKBIRD FLY and THE LAND OF FORGOTTEN GIRLS.
The structure of her latest novel was downright bold and had me revisiting storytelling rules: 4 intertwining viewpoints, 3 told in third person, 1 in first person.  Who says we can’t go forth and break rules to tell a good story well?

Hurrah for Tony Abbott for bravely bringing to middle grade literature the
unfortunate but true reality of child sexual abuse in the quietly powerful, beautifully-written friendship story THE SUMMER OF OWEN TODD (Farrar Straus and Giroux).  If 11-year-old Owen reveals what his best friend Sean secretly tells him, he’ll surely lose Sean's friendship. But if he doesn’t, something worse will happen to his friend.
Click here to read Abbott’s Nerdy Book Club post on why he wrote this important book.
His Author’s Note also shares how once he’d heard the true facts of this story, he couldn’t let it be. The story had to be told.  Abbott references the resources of RAINN – Rape, Abuse, & Incest National Network – with its phone number, (800) 656-HOPE.

Prinz medalist John Green’s TURTLES ALL THE WAY DOWN (Dutton) is
certain to save lives, too – first by telling the story of 16-year-old Aza who’s trying non-stop to be what family and friends and she want, while struggling with the non-stop spiraling thoughts caused by her Obsessive Compulsive Disorder.  Green does a masterful job of allowing the reader to live inside Aza, to know her pain, to know her heart.
Green is also certain to save lives by sharing his own OCD story while promoting the book.
Click here to listen to him talk about what OCD means to him.
Click here to read his brutally-honest interview with the New York Times.

I sincerely thank the authors of the above four titles – Dan Santat, Erin Entrada Kelly, Tony Abbott and John Green.  Their characters’ brave hearts and their heartful story-telling have given me the courage to keep keepin’ on.
May they do the same for all of our TeachingAuthors readers!