There's a Monster in My Closet

(Carmela here--I'm posting this for Mary Ann because she's having computer issues. So if you're reading online, ignore the above byline. )

There's a Nightmare in my Closet is a terrific picture book by Mercer Meyer. I first read it in library school and connected with the little boy and the monster who lived in his closet immediately (even though I was 22 at the time.) As a kid, I had to make sure my closet door was shutshutshut, before I could even think of getting into bed, let alone sleep. 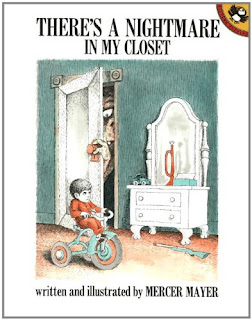 Reading Bobbi’s post, “Shadows on the Wall” hit a lot of my own sensitive spots. Unsurprising since we both write historical fiction (a notoriously “tough sell” in the currents market) and don’t have agents. Actually, I’ve never had an agent, something that has always made me feel there is something wrong with me, no matter how many books I’ve sold without one.

But those aren’t the monsters in my closet (at least this week.) There is literally a MONSTER in my closet.

A monster of a book. And I’m afraid of it.

This book has been germinating (festering?) for over 10 years, if you subtract the years I was dealing with so much family drama that writing this blog every couple of weeks was all I could manage. Well, the drama has subsided, and that novel is still there. All 300 plus disjointed pages of it.

Why would a book scare me? Especially since those are my words and my characters?

For one thing, over time (and with a lot of research) this novel has grown (and grown) from a straightforward, single character POV, third person in prose, to a three character, first person POV…in verse. I wasn’t trying to be cool or innovative in choosing to write this way. As I wrote, I realized that there was no way this particular story could be told through a single character’s eyes. I found that the story was too heavy written in prose. It worked much better in short free verse scenes. I’ve never written in verse. I’ve never written in multiple POV. One thing I was doing during “the drama years” when I wasn’t writing, was reading every multiple POV verse novel I could find. (So the time wasn’t entirely wasted.)

Why else does this particular book intimidate me? It was weighted with a lot of emotional baggage. My story “seeds” almost always come from my own family and family history. Yankee Girl was about my own childhood, Jimmy’s Stars from my mother’s family. This WIP is from my father’s family. He knew I was writing it (as does every living member of the Rodman family). I had so hoped to finish it before he passed away this last September, on his 95th birthday. He helped with so much of the research, as did my Rodman cousins.

I am afraid this book will be 300 pages of nothing-in-particular (yes, I DO know what the book is about and could give you the 25 second elevator pitch). Years ago, an agent who read the synopsis and first ten pages said, “You write very well, but I can’t imagine WHO would want to read THIS,” handing me the manuscript, dangling it between two fingers, as if it were contaminated.

In the time I’ve been working (or not) on this novel, I have written and sold four picture books, so it’s not like I have writer’s block. I have This Particular Book Block. I am afraid. I’m afraid I won’t do justice to the story, a story that I fervently believe in. Maybe too fervently? Too emotionally involved?

I don’t have much hope in publishing this book. I have been told I am a “literary” writer to the point that I should have a t-shirt that reads, “Literary Writer, will work for food.” (Literary writer is editorspeak for “Good reviews, no sales.”) Deep down, I hate the thought of self-publishing a story that I’ve wanted to tell my whole life, just so my friends and relatives can read what I’ve been doing for ten years. (Not casting shade on self-publishing, but that takes skills I don’t possess, to say nothing of my own money.)

So there you have it. My scary book-in-the-closet. The book that is keeping me from writing anything else. I can’t go any further as a writer until I fling open the closet door, and drag the monster into daylight. Do what needs to be done to it. Send it out into the world to fend for itself.

And maybe…just maybe, like the monster in Mercer Meyer’s There's a Nightmare in my Closet, it will turn out to be a meek creature, as scared of me as I am of it.

P.S. If you haven't entered our giveaway for a chance to win the 2018 Children's Writer's & Illustrator's Market (CWIM), there's still time! See this post for details.
Carmela Martino at 12:30 PM
Share