At last it is time to do the dance of joy and celebrate.  Yippeeeeee, Hallelujah!  My new book Buried Lives: The Enslaved People of George Washington’s Mount Vernon(Holiday House Books) will be released in a few days-on December 18, 2018.

It has been five years in the making.  Now that I think about it, it has been closer to five and a half years since the first idea for this book planted itself firmly in my mind--and more importantly in my heart.  At the risk of sounding melodramatic, when I take on a topic for a book, I live with the people I write about for the rest of my life.

The people from Buried Lives I’ll carry with me along life’s bumpy road are William Lee (Washington’s valet), Christopher Sheels (the young man who took over as valet), Caroline Branham (housemaid), Peter Hardiman (Caroline’s husband who ran Washington’s mule breeding operation), Oney Judge (Martha Washington’s lady’s maid), and Hercules (chief cook at President’s House in Philadelphia).  Along with these six people, their families join me too. For some of them, I know their mothers, their grandmothers, their aunts, their uncles, their spouse, their sons, and their daughters.

While I’m researching and writing the book, the subjects of my book are never far from my mind.  I think about them as I figure out how to bring their true-life stories to readers in a way that is accurate and entertaining.  I think through the details of their experiences.  I ponder over them.  I put myself in their shoes so to speak-at least as much as possible.  The people I write about must be real to me.  If they aren’t real to me, they will never feel real to my readers--even though they were real people.

Along the way of telling about the lives of these six individuals who were enslaved at Mount Vernon, I weave in Washington’s changing views of slavery through the years.  By 1799, 317 enslaved people lived at Mount Vernon. Washington owned 123 of them, he rented 41, and 153 individuals were owned by Martha’s dower estate.   Near the end of his life, Washington wrote a will that would freed the 123 people he owned.  But neither he nor Martha could free the 153 people that were part of her estate.  This sets up a devastating separation of some families after the deaths of George and Martha Washington.  Readers will find out which of the six were freed and which remained enslaved.

Also part of Buried Lives is the ongoing archaeological dig in the cemetery for the enslaved people of Mount Vernon.  The graves, which are unmarked, are slowly being located and counted—while none of the remains are disturbed.

In a few days, Buried Lives: The Enslaved People of George Washington’s Mount Vernon will leave my protection.  It will be released into the world to stand on its own.  It is my hope that the book I’ve written will allow six, specific enslaved people from Mount Vernon to step out of the fog of history and stand in the bright light of recognition.  I want my readers to like them as much as I do.

Readers, to enter our drawing for a chance to win an autographed copy of Buried Lives: The Enslaved People of George Washington's Mount Vernon, written by Carla Killough use the Rafflecopter widget below. You may enter via 1, 2, or all 3 options. 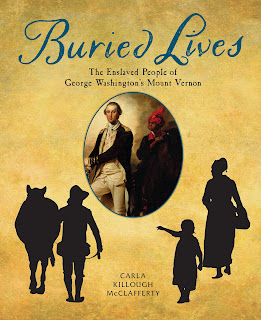 If you choose option 2, you MUST leave a comment on TODAY'S blog post below or on our TeachingAuthors Facebook page. If you haven't already "liked" our Facebook page, please do so today!
In your comment, tell us what you'd do with the book if you win our giveaway--keep it for yourself or give it to a young reader?
(If you prefer, you may submit your comment via email to: teachingauthors [at] gmail [dot] com.)
Email subscribers: if you received this post via email, you can click on the Rafflecopter link at the end of this message to access the entry form.
Note: if you submit your comments via email or Facebook, YOU MUST STILL ENTER THE DRAWING VIA THE WIDGET BELOW. The giveaway ends December 21, 2018 and is open to U.S. residents only.
P.S. If you've never entered a Rafflecopter giveaway, here's info on how to enter a Rafflecopter giveaway and the difference between signing in with Facebook vs. with an email address.