Today's Wednesday Writing Workout is courtesy of Leanne Pankuch, my "Writing Buddy" and former critique group member. Long-time TeachingAuthors readers may recall this post where I mentioned Leanne. Well, I'm happy to share that Leanne's first novel, Dragon's Truth, was published earlier this year by Vinspire Publishing. In honor of the book's six-month birthday, Leanne is offering a special giveaway of the novel, which you can read about below.
Here's Leanne's official bio: 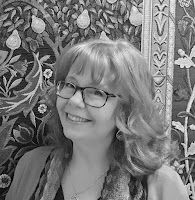 Born in Canada, Leanne Pankuch now lives in New York’s mid-Hudson Valley. She walks in the woods, plays with her dog, amuses her husband, reads way too many books, and sometimes moonlights as a substitute teacher. She also writes stories about dragons, dogs, and strong female characters who rush headlong into following their dreams with plenty of passion and not much planning. You can follow Leanne through her website and on Instagram, Twitter, and Facebook. 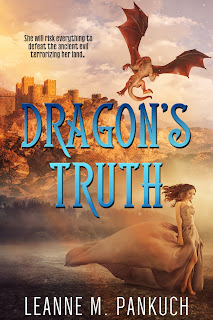 Fourteen-year-old Rhyannon Kember dreams of dragons, wizards, and magic. She feels constrained by her ordinary life and overshadowed by her beautiful sister Elspeth. When Elspeth is kidnapped, Rhyan embarks on a journey to save her sister and face the evil threatening their world. She finds friendship, adventure, love, and the magic and power she's been craving—but she also discovers a growing darkness within herself. Will she be able to control her abilities and save Elspeth? Will she choose the path of light? Or will she slip into the dragon's darkness?

NOTE: As a special promotion for the six-month publication anniversary of Dragon’s Truth, Leanne is giving away a signed copy of the novel along with a decorative map of the world of Dragon’s Truth. See her website for complete details.

And now, here's Leanne's great WWW, a twist on The Hero's Journey:

In addition to fulfilling my dream of writing an epic fantasy with a female main character, my debut YA novel Dragon’s Truth reflects my long-time fascination with the concept of the monomyth, better known as The Hero’s Journey (THJ) – the term coined by academic Joseph Campbell. THJ is a classic story structure shared by many tales from different cultures. As many of you may already know, books (The Hunger Games, the Harry Potter series, The Hobbit), movies (Finding Nemo, Star Wars, Black Panther), and even TV, cable, and online series (Dora the Explorer, Game of Thrones, Stranger Things) have main characters who follow plot-paths that can be mapped to THJ.

But great storytelling doesn’t just involve heroes—you’ve got to have villains/antagonists, too. My main character, Rhyan, would never have set out on her adventure if her sister hadn’t been kidnapped by my villain. And who would Harry Potter have been without Voldemort?

When I sat down to begin the sequel to Dragon’s Truth, I not only plotted my MC’s journey, but my villain’s journey as well—I called this process shadow plotting. I used color-coded notecards and recorded the stages of each character’s movement through THJ—then I laid the cards out in parallel rows, lining them up according to the chapters where they occurred. The process was a revelation! It truly fleshed out my villain in my mind’s eye. For the first time, I recognized him as the hero of his own story—a story that began long before Rhyan ever set out on her adventure. As I began to write, that clearer image in my creative mind translated on to the page. My villain became a fuller and richer character—not just a vague phantom that does evil or is “bad” for some unknown reason. And my fantasy world and Rhyan’s story became more vivid and meaningful as a result.

Ready to try out shadow plotting with your own WIP? Using notecards or a document with labeled columns, answer the following questions about your main character and your antagonist/villain:
Review the cards. Have you learned anything new about your villain/antagonist? Are they content in their life until the hero shows up? Or are they already near the end of their adventure when the hero throws a wrench in their plans? Do they even know/care about the hero and her quest/goal?

No matter your genre or format and regardless of your chosen plotting or structure device or plot/writing bible—The Writer’s Journey, Save the Cat, Wired for Story, Wonderbook, The Plot Whisperer, The Snowflake Method, etc.—I truly believe that shadow plotting can be a valuable, insightful tool for adding depth and authenticity to your characters and their story.

-----
Our thanks to Leanne for today's WWW. Do let us know if you try this exercise, and how it works for you. And don't forget to enter to win a signed copy of the Dragon's Truth and a cool map! See Leanne's website for details. And if you haven't yet entered our TeachingsAuthors giveaway of Deanie Yasner's debut middle-grade novel, Essie Rose’s Revelation Summer, you can do so on this page.