2 Tips for Bridging the Middle Plus 2 Book Suggestions


Today I have the honor of kicking off our next TeachingAuthors topic: "Messy Middles." But before I get to my post, I want to congratulate the winner of our latest TeachingAuthors giveaway:

Carl will soon be receiving an autographed copy of Ona Judge Outwits the Washingtons: An Enslaved Woman Fights For Freedom by my fellow TeachingAuthor, Gwendolyn Hooks. Our thanks to all who entered. Be sure to stay tuned--we'll have one more giveaway before the year ends.

Now, for today's topic: It recently occurred to me that, while we've discussed story beginnings and the inspiration for them, we've never devoted a series to discussing middles. The reason? It's not an easy topic to address.

I'm currently teaching a writing class at College of DuPage called "Beginnings, Middles, and Ends," which is named for the book by Nancy Kress that we use as our class text. In the text, Kress herself has difficulty providing a precise definition for what we mean by the middle of a story.  She describes it in part as follows (italicized in the text):


"The middle of a story develops the story’s implicit promise by dramatizing incidents that increase conflict, reveal character, and put in place all the various forces that will collide at the story’s climax."

She goes on to say:

Building that bridge can be a tricky process, especially if you're a pantser like me. (As I explained in this post, pantsers are writers who don't plot a novel in advance, but instead write by the "seat of their pants." The opposite of a pantser is a plotter--a writer who creates an outline or some sort of road map before actually writing the story.)

While middles can cause problems for picture book and short story writers, too, the two tips I'm sharing today are probably most useful for novelists.

1. Feel free to write your story out of sequence.

When I was working on the middle of my first novel, Rosa, Sola, I got stuck. I didn't know what should happen next. After banging my head against a wall for a few days, I realized that I DID know what needed to happen a few chapters ahead, near the end of the novel. So I wrote that future scene next. I then created a patchwork of scenes to fill the gap--working on each scene as it occurred to me rather than in the story's chronological order. This seems such an obvious solution now, but when I share it with my writing students it often has the same AHA! effect it had on me at the time.

2. If your story takes a wrong turn, becomes boring to you, or you lose energy for it, reread it from the beginning and stop at the last scene where you're still interested/engaged in the story.

I ran into this problem while writing Playing by Heart. I got to a point in the middle of the novel where I couldn't move forward. I realized it was because I didn't like the story anymore. When I reread the draft, I discovered that my protagonist, Emilia, had made a choice that was out of character, and that had sent her on a detour that made no sense. After I cut that out-of-character scene and all that followed, I was able to get the story got back on course.

My two book suggestions if you're having middle troubles: 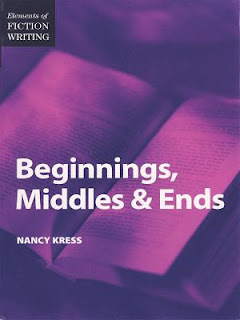 As you might guess, I recommend Kress's Beginnings, Middles, and Ends to writers struggling with middles. In addition to helpful tips and concrete examples, the book includes practical exercises to use on your own projects. The book is from Writer's Digest Books' Elements of Fiction Writing series and was initially published in 1993. Even though the publisher re-released it in paperback in 2011,  some of the content is a bit dated, but overall I think it's still a valuable tool for addressing issues not only with middles, but beginnings and ends, too.

By the way, if Kress's book sounds familiar, it may be because I included it on a list of twelve writing craft books I recommended in a post several years ago. 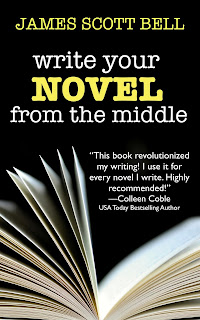 James Scott Bell was the author of not one, but two books on that list. My second suggestion for those dealing with middle issues is another of his craft books: Write Your Novel From The Middle: A New Approach for Plotters, Pantsers and Everyone in Between. I heard Bell speak at a writing conference about the approach he takes in this book, and it sounds like an intriguing one. I have to confess, I haven't tried it yet myself, but several authors I know have found the book helpful. If you've read Bell's book, please share your response to it in the comments. And if you have any suggestions for coping with messy middles, do let us know!