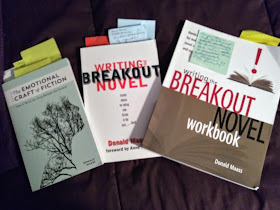 This writing exercise – one I use in my classes -- is adapted from one of my favorite writing books, Writing the Breakout Novel Workbook by Donald Maass (2004). Sooner or later, every writer needs to use an outline to help weave together various literary components. This is especially true if there is a large cast of characters or a multi-layered plotline. Agents often request outlines before seeing the full manuscript. Publishers will require them if an option novel is proposed.

There is no magic number for how many pages an outline needs to be effective. As with everything else grounded in the creative, it depends upon your purpose. Many long-winded outlines can be just as useless as those not long enough. I like this outline template by Maass because it sharpens the focus of the narrative. Also, it works very well during the revision process, when you outline your draft to help add texture, sharpen the causal chain, and  highlight  the character’s outer and inner conflict.

Plot fundamentals. Write down the following.

1. Where is your novel set? Who is your main character, and what is his primary conflict or goal?

2. What does your protagonist’s most want and why?

7. Who is the most important secondary (supporting) character, what is his primary conflict, and what does he most want?

8. Who is the novel’s antagonist, what is his primary conflict or goal, and what does he most want?

The Middle. Write down the following.
1. What are the five biggest steps toward the solution of the central conflict? In other words, what are the five turning points or events, including the story’s climax, that take place in the narrative?

2. What are the five most important steps toward, or away from, what your protagonist most wants? These steps are consequences of choices that the protagonist makes. This step helps identify the causal chain that creates the plot’s spine.

3. What are the three most important steps (each) toward, or away from, the resolution of your first and second subplot?

4. What are the three most important steps (each) toward, or away from, the resolution of the plot layers?

5. What are the three most important steps toward, and away from, the resolution of each main conflict facing your secondary characters and your antagonist?

3. Two moments frozen in time. (For example, Juliet laments over Romeo, as Romeo listens below. Their first kiss erases all the wrongs of the past and ignores all future conflicts. Another example: Eliot says good-bye to ET, and ET responds with a gesture, saying: I’ll be right here.)


Check out his book for the complete discussion on his outlining process!