Each Teaching Author has had a wildly different take on the subject of "writing surprises." Writing is itself a surprising art. You start off with a voice or character or image...and you think you know where you are going. (I've stopped saying I know where I'm going.) Surprise! You wind up somewhere else entirely.

Self-help books tell you must know where you are going. You must have a goal. I know some writers who make outlines and story boards and know what's going to happen before they start writing. That seems to work well for them, but it doesn't for me. One of my favorite "writerly" quotes is by E. L. Doctorow.  "Writing is like driving a car at night.  You never see further than the headlights, but you can make the whole trip that way." That is me. I know what I'm writing this very minute, but not what's coming next. (I don't even know how I'm ending this post!) Writing may be a journey, but your destination can change. In fact, I've never once started writing, and ended up with the book I thought I was writing. 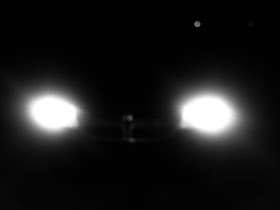 Yankee Girl began life as an autobiography. That didn't last long. Who would read about a person they'd never heard of, who had done nothing remarkable...and who was a child on top of  all that? The original version started with me as a fifth grader and ended with high school graduation. An impossible time frame, with long stretches where nothing happened. Surprise! Writing about yourself is hard. I was boring myself, writing about my own life!  However, once I gave myself permission to fictionalize characters and conversations, and shrink the time line from seven years to nine months, the story arc appeared. Even then, the final chapter, which I had in mind from the very first, vanished. When I read the last chapter, it was as if someone else had written it. Wow, I thought. Where did that come from? That wasn't what I planned to say. This is kind of...better!

That's how it goes with my writing. Jimmy's Stars' original title was The Year We Didn't Take Down the Christmas Tree (catchy, huh?) and it was, of all things, a picture about a Christmas tree. Not one of my picture books had a "destination" when I began them. I wrote as much as I knew...until I hit a wall. Time to put that one away for a month...a season...a year. 99% of the time when I came back, and started writing, the end appeared without slamming my head against the wall trying to "think" of an ending. First Grade Stinks' ending took three years to appear. (Three weeks of actual writing...the rest of the time not thinking about it).

In the end, the most surprising thing about writing, is that I can do it at all. I've written my whole life so it's something I've never really thought about very much.  In fact, the one thing I tell my writing students is "Don't think too much." Just grab that voice...that image...that character...and turn on your headlights. The rest will come.