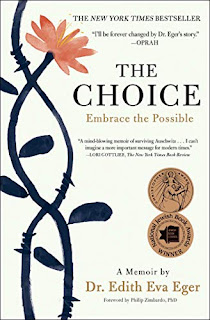 My first thought was  "Absolutely nothing! I'm drowning here!"

And then, in one of those serendipitous moments, my answer simply appeared...on my Kindle.(This happened last week, so this is a lesson from 2021 for...2021!)  I was checking for a new title I'd pre-ordered. Instead I found a book I bought last spring in the depths of my quarantined depression. No doubt I'd discovered it on a list of "Books to Get You Through Lockdown." Lists that included books like Yoga for Dummies, Breathe in the Moment and Sourdough Bread is the Answer!

This one was called The Choice: Embrace the Possible by Dr. Edith Eva Eger.   I don't know how I missed it when it was first published in 2017.  Maybe because I'm suspicious of books with two word titles when one of the words is "The"...as in The Secret or The Answer, as if this book and only this book contains priceless information. Still..."embrace the possible"?

I popped open Dr. Eger's book and scanned the table of contents. Now I remembered why I bought it. It was part self-help, part Holocaust memoir. How did these two things mesh in one book? The introduction mentions that Dr. Eger had been a protege of Dr. Viktor Frankl. I'd read Frankl's Man's Search for Meaning, his account of Auschwitz, years ago. Was there more to say on the subject of controlling your own mind in the worst of situations? Is that what The Choice was about?

Of course it's ridiculous to compare life in Auschwitz or surviving postwar Hungary to anything we might be experiencing. To quote Dr. Eger "...there is no hierarchy of suffering. There's nothing that makes my pain worse or better than yours...This kind of comparison can lead us to minimize or diminish our own suffering." The mindset of anyone who is in a situation they perceive as hopeless is the same, no matter the circumstances.

What? It's OK to feel terrible?  Even if my family was healthy and employed? I didn't have to feel guilty for feeling bad for missing family and friends and day-to-day life? OK! I read on.

Edith Eger had been a 16-year-old dancer/gymnast on the 1944 Hungarian national team, when she and her family were sent to Auschwitz. How she survived by refusing to think like a victim is an incredible story, similar to Frankl's. However, Eger's book spoke to me in a way that Frankl's did not. The voice of the teenaged Edie was easier to identify with than Frankl's, who was a practicing doctor in his thirties during his imprisonment.

While this book has given me a different perspective on Life in the Land of COVID, it has also given me a new weapon in my never-ending battle with writer's block. All the negative inner chatter that broadcasts from the brain night and day can be silenced by...refusing to think like a victim. Dr. Eger went through many of the same self-defeating monologues herself in her post-war life. (You'd think if you survived Auschwitz, you'd feel invincible...but that was not always Dr. Eger's experience.) She had to re-discover that 16-year-old who never feared the Nazis.

Edith Eger became a clinical psychologist in her fifties, and many of her fear-busting techniques are those she developed in her practice. Some I've encountered in therapy, some are new. They all have Dr. Eger's take-no-prisoner's philosophy. I feel as if she has actually has my back when I fall into hopeless thinking, or a panic attack.

I leave you with one last image of Dr. Eger. As a teenage dancer/gymnast, she prided herself on the ability to kick higher than anyone in her class. Today, as a ninety-something psychologist, she can still do that high kick! In fact, that's how she ends her speeches. I couldn't do a high kick when I was sixteen, let alone now. But just picturing her doing that high kick (which by the way, you can see her perform, online) sets my spirit free, to embrace the possible.