For Our Faithful Followers. . .

Yes, it's Memorial Day. I am not going to open a political can of worms by telling you how to spend your day (although "holiday" and "celebrate" never seemed appropriate words to use in connection with a day originally called "Decoration Day"...a day the families of Union soldiers "decorated" their graves.) Somehow along the way, Decoration Day became Memorial Day and Memorial Day became the unofficial first day of summer.

I am choosing to honor the unofficial start of summer by frying myself at the beach. And being a writer of historical fiction, I am contemplating those who have served our country in the military, past and present.

However you feel about a particular war or "conflict" (Neither Korea or Vietnam was ever officially designated a war, to say nothing of whatever you call the current action in the Middle East), the important thing for a writer is to not allow the world to forget the men and women who believed in sacrificing their own dreams and lives in service to their country.

I am from the generation whose parents were in WWII. "What did your father do in the war?" was a question we kids asked as a matter of course. My parents were Navy cryptographers. My father-in-law, a Naval commander had not one, but two boats sunk from under him in the Pacific. My first boyfriend's father was in the infantry invasion of Italy. One of my distant relatives who had lied about his age to get into the service, died at D-Day, age fifteen. I had brothers who fought brothers during the  Civil War.
(This is my mom the WAVE, home on leave. Note service flag in window. The five stars were for my mother, her three brothers, and a young man who boarded with my grandmother.) 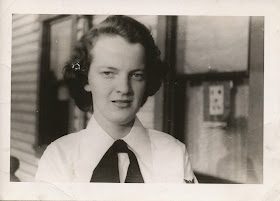 So today, as you are sizzling up those cheeseburgers or trying to find a place to park your towel at the beach, remember.  It's not our personal politics that matter, but those of our ancestors. We should honor their choice. Memorial Day...a day of memory.