Really? Do we have to talk about revision AGAIN? Happy Poetry Friday!--now rewrite that poem...


So...rewriting.  Can't we just skip it?  Can't we just write something brilliant and then jump to that thick-carpeted Hollywood office where we're signing the movie contract based on our book?
I've been feeling discouraged this week, so here's a poem about my work-in-progress, another novel-in-poems which I'd hoped would be finished when I turned in the April 14th draft in my novel writing class.

Finished?  Heaven's no!  Now that I have notes on this draft, I'm messing with it again.  My book clearly needs a little more curry or cumin or molasses or heaven-knows-what.  *Sigh*
NOVEL THOUGHT
by April Halprin Wayland
I'm walking quickly on this path
I edit words I see are chaff
I'm making characters three-dimensional
I've integrated the high school staff
(the stereotypes were unintentional)
I've cut the zoo scene and giraffe
though it was beautifully unconventional
I'm trying not to be inflexible—
and keeping it was indefensible
(though parts of it were quite exceptional)
If only I can reach that raft
and climb aboard, untie the rope—
I'll sail off with the final draft...
at least I hope!
x
2011 April Halprin Wayland, all rights reserved
My novel writing teacher's shorthand for "I like this part" is a check mark at the end of the line or sentence.  It's an effective and easy way to compliment someone.  No need to put a smiley face or write, "nice"--just a simple check mark and move on.  It also allows the person who is critiquing the book to keep reading...to stay in the flow of the book while still commenting on it along the way.x 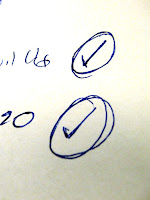 .
When my eight fellow classmates and my instructor had read my novel, I lugged the manuscripts home and read everyone's notes. Then I tossed the notes that were complimentary, the ones with lots of check marks and comments about how fabulous the book was.
x
I mean, yes, yes--thank you, glad you like it--SO DO I--that's why I WROTE it, I want to say.  Let's get to the meat, the real nitty gritty, the stuff you couldn't stand, the poems that should be cut.  Isn't that why we're here?
But I was feeling pretty low.  So I reached into the recycling box and took out a handful of the compliments--the ones I'd so blithely dismissed.  I read them slowly.  I tried to keep my getting-ready-to-be-defensive voice from yelling back at them.  I just. Let them. Like. My words. 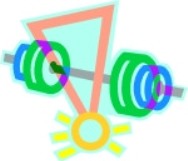 WRITING WORKOUT: What to do with the compliments


So what's your writing workout today? Simply this: Listen to the good stuff, too.
April Halprin Wayland at 3:13 AM
Share