Where Can A Young Writer Get Published? Happy Poetry Friday!

...which is over at Check it Out today ~
thanks for hosting today, Jone!
.
We've returned from our blog-cation tanned and rested.  Esther kicks off this round's topic about contests with her post on Lee and Low's New Voices Contest, including several juicy tidbits (did you know that an early version of Christopher Paul Curtis's The Watsons Go to Birmingham lost a contest before it went on to win the Newbery?) 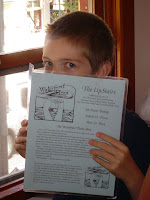 Links to contests for young writers:
Here's the page on my personal website which lists a few select contests (including a peace poetry contest), and here, on the TeachingAuthors website, Carmela has compiled a ton more.

My poem for Poetry Friday:
I vividly remember learning I'd won a writing contest when I was in second grade.  Winning came with a fancy bookmark(!) and a certificate to Martindale's Bookstore in Santa Monica for any book in the entire store!  I was intoxicated.  Any book!

I chose Dr. Seuss' Green Eggs and Ham, much to my father's disappointment.

(He had his heart set on The Big Book of Japanese Fairy Tales.)

Winning a contest, getting something published...the POW! of this is experience is indescribable. And no matter how many books you have published, or how many of your poems are in magazines and anthologies, most writers will tell you that an acceptance is an acceptance--the ZING! is as powerful each time.

And so, Campers: get out of your comfort zone and enter a contest or try to get something published (which is the same thing, if you think about it).

Which brings us to today's poem. It's in my verse novel, Girl Coming in for a Landing--a novel in poems, illustrated by Elaine Clayton (Knopf, 2002).  It can be performed by one, two, or three people.

A letter in the mail!
They're going to PUBLISH my poem.
In their magazine.
In June.

My brain is exploding!  I can’t sleep!
I woke up early,
my body buzzy
like a playground ball boing-ing down a long hallway.

THEY'RE GOING TO PUBLISH MY POEM!
I won’t tell anyone.
I’ll wait until the magazine comes out.
How can I wait that long?

I won’t tell anyone.
I’ll just casually hand them the magazine
or wait
until someone at school sees it.

So, teens, 'tweens, ten-year-olds, scribblers...all: go forth and enter!

Because here's the secret:
whether or not you win,
you've won.

Today's post is by April Halprin Wayland who thanks you from the bottom of her sandy toes for reading this far. 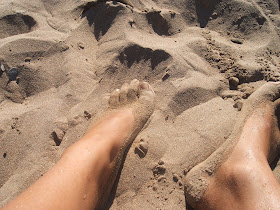