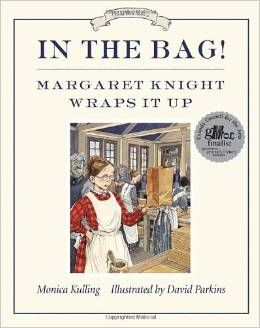 In my previous post,  I offered that isn't it a wonder that using fictional

a
techniques to relay the telling of facts and biography seems a natural fit?

Monica Kulling is the master of biography.  Monica’s poetic narrative – a hallmark of all her books – breathes life to her characters as she explores the thematic values of determination and persistence. Her Great Idea Series, published by Tundra Books, is one of my favorite nonfiction series for young readers.


Monica excels at taking a moment in history, oftentimes a forgotten moment, and fashioning a story that is both compelling and informative. The books showcase inventors, some more known than others, and how they were inspired to create their inventions that, in many ways, changed the course of history. Monica’s fascination with the late 19th and early 20th centuries confined her research to that particular period. When choosing who to write about, says Monica, “I need enough material to make an interesting narrative.” Monica researches extensively, using online and in print sources.


Inventors are clever, says Monica, and they are ingenious in finding ways to realize their dreams. She focuses on that ‘a-ha’ moment, when a great idea clicks in your brain and has you racing off in pursuit. 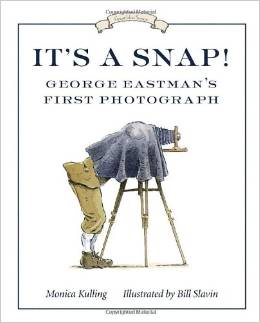 The picture book format allows Monica to bring depth and breadth to each inventor’s story.


Her book, It’s a Snap: George Eastman’s First Photograph (2009), illustrated by Bill Slavin, tells the story how Eastman invented the photograph, and thus ushered in the new age of documenting history as well as the advent of ‘selfies.

Another book in the series, Going Up: Elisha Otis’s Trip to the Top (2012), illustrated by David Parkins, depicts the founding of the elevator, allowing skyscrapers to literally touch the sky. And one of my favorites, the award-winning In the Bag: Margaret Knight Wraps It Up (2011), also illustrated by David Parkins, tells the story about the young inventor of the folded paper bag who eventually owned over twenty patents.


Says Monica, “I’ve always been more interested in the struggle than in the achievement. It’s the nail-biting will-they or won’t they, can-they or can’t-they, that engages a young reader most.”


Tundra Books chooses wonderful illustrators. Each of the four illustrators who have worked on the series has been able to depict the time period in all its glorious detail. ﻿
One of my favorites, Richard Rudnicki’s illustrations for Making Contact: Marconi Goes Wireless (2013) are full of the same energy as Monica’s characters. His sweeping landscapes, done in acrylics on watercolor paper, are particularly striking, depicting the Newfoundland coastline, with its cold grey colors, whirling storm clouds, and the bright dot of a kite flying in the wind make me shiver with awe. 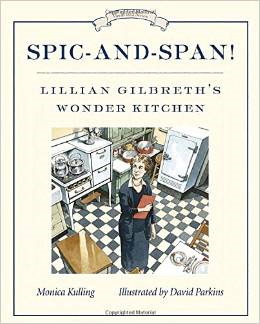 This book follows the amazing story of Lillian Gilbreth, the inspiration for the matriarch in the movie and book, Cheaper By The Dozen. Her life is so much more amazing than a movie or a book, however. When her husband dies unexpectedly, Lillian forges ahead to raise her children alone. An efficiency expert, industrial engineer and psychologist, Lillian’s designs and inventions are still considered fundamental to contemporary kitchens eighty years later.

Thank you, Monica, for this neat activity from the Learning Activities for Spic-and-Span! Lillian Gilbreth’s Wonder Kitchen:


Can you think about anything in your classroom or your home that needs to “run like clockwork”? What steps must be taken in order for this to happen?


As a class, walk around the classroom and make a list of any “inefficiencies.” Is there anything about the classroom’s design that could be improved on in order to save time and space?