I Love Novels in Verse

My turn to weigh in on National Poetry Month. Topic: novels in verse.  I'm fascinated with this way of storytelling, and have been trying to write one myself for longer than I care to reveal.

The only poet I really loved was Pulitzer Prize Poetry winner, Karl Shapiro (who incidentally, was the only then-living-poet was in my high school literature books). Not only was he my introduction to free verse ("It doesn't HAVE to rhyme?) but he wrote about concrete situations and objects that I recognized.  You gotta love a guy whose poems had titles like "Auto Wreck" and "Manhole Covers." Nary a daffodil, meadowlark or fluffy cloud wafted through his poems. He influenced me to write terrible free verse, which I thought was terribly profound...like Shapiro. (I was 16. I eventually forgave myself.)

Mostly, I learned to slink down in my seat whenever we had a "poetry unit." 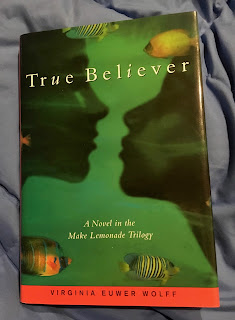 Fast forward 20 years. I was a university librarian when I discovered my first verse novel, Make Lemonade by Virginia Euwer Wolff. Wow! A story told in free verse...so free that you are never sure of the personal details of the main character, LaVaughn, and her friend, Jolly. What they look like, where they live. Wolff leaves the reader to fill in those details for himself. Each poem like a chapter. A one or two page chapter. What a concept!! This was a literary whack on the side of the head. Of course, I reasoned, this was just a quirky concept. No one else would ever write such an outrageous book. Of course I was wrong. Wolff 's sequel, True Believer, won the National Book Award and was a Printz Honor book. 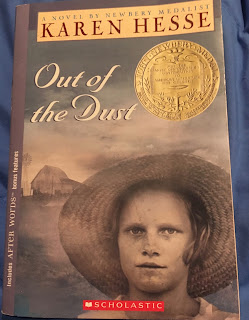 Fast forward, and it's 1998.  The next verse novel that caught my attention was Out of the Dust by Karen Hesse, that year's Newbery winner. Not only a Newbery winner, but also winner of the Scott O'Dell Award for best historical fiction. This is in My Top 10 of Books Published in the Last 20 years. It has everything I look for in a book--a girl standing up to hard times (in this case, the American Depression--one of my favorite historical periods) An absent parent, and one who is emotionally absent. A struggle for a dream. All in free verse. I know some people don't share my love of this book. Well, we all have our opinions and now you know mine. 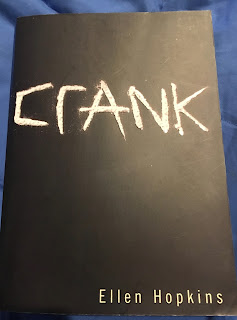 The last book that blew me away with it's innovation was Ellen Hopkins' first YA novel, Crank. Aside from Hopkins fearlessly tackling the road to drug abuse taken by the main character, Kristina/Bree, the author's poems are visually stimulating. Some chapters are obviously shape poems. In some there seems to be two separate poems on the same page.  Each is a poem to itself, but they are arranged so that they can be read as one whole. Who does this? (I'm sure someone else had before Crank was published in 2004, but I hadn't read it.) The way the poem is set on the page is organic to the words. Hopkins pulls no parlor tricks with her poetry. The poem looks that way, because it reads that way. (There are two more volumes in the Crank trilogy; Glass and Fallout.)

So why am I hooked on novels in verse? Certainly not because they are easy to write. They're not. The book may be 300 pages, but with this style of writing and page lay out, the actual word count is ridiculously low. As with picture books, every word must count. The writing is vivid, tight, and packs an emotional punch with the fewest words possible. It's a real writing challenge. Trust me; I know!

It is an easy read for the student, without the student being aware of how easy it is. They see a 300 page book, and think Nope. I don't like to read. I don't have time. I'm not a good reader. (Pick one.) Then they open the book and see all that lovely white space, a relatively small amount of words. (Nothing says I don't want to read this than large blocks of description.) Since each page or two is a complete episode, if not an entire chapter, the reader can put down the book without fear of losing track of the narrative when he picks it up again.

I have heard verse novel detractors dismiss the form as "just creatively arranging sentences on a page." If that is all there is to a book, just rearranging sentence breaks, or turning each page into a shape poem (which would be exhausting to write and read)I would agree. But I've never read a bad verse novel, and I've read every thing published in this genre for the last 20 years. You have to be a darn good writer to pull it off. A number of writers (Ellen Hopkins comes to mind) were primarily poets before attempting a verse novel.

The years I've spent writing and revising and ultimately rejecting my own verse novel have not been in vain. In the X number of years I've had this project in my computer (and head) I've honed my sense of what makes these books work. To contemplate why my book should be a verse novel. I have concluded that the subject is so intense that it bogs down in regular prose. I tried to write it that way for two years before I made the big leap to verse. Once I started, I knew this is the only way the story would make sense. to me.

I have this season's verse novels--Blood Water Paint by Joy McCullough, The Poet X by Elizabeth Acevedo, Forget Me Not by Ellie Terry (this came out last year)--all cued up and ready to read on my Kindle. Perhaps one of them will have the key, the clue, the Golden Ticket that will help me finish my own book.

AND WE HAVE A WINNER!

The winner of our giveaway 30 People Who Changed the World edited by Jean Reynolds is....

Congratulations, Buffy S. and thank you to all who entered out giveaway. Watch this space for our next giveaway.