The Crowned Prince of Poetry


We continue celebrating National Poetry month. Esther started off our celebration of National Poetry Month; April had a fabulous time at the Poetry Rodeo created and sponsored by Pomelo Books. As she puts it, “Truly P-o-e-t H-e-a-v-e-n.”

As we celebrate National Poetry Month, we also celebrate its luminaries, and none shines brighter than Lee Bennett Hopkins. If ever there was royalty in poetry, then surely the crowned Prince of Poetry would be the irrepressible Lee Bennett Hopkins. Educator, poet, author, and anthologist, he has written and edited over 100 books for children.Once a senior consultant to Bank Street College's Learning Resource Center, and a curriculum specialist for Scholastic Magazines, Inc, Lee has written and edited numerous award-winning books for children and young adults,  professional texts and curriculum materials. He has taught elementary school and served as a consultant to school systems throughout the country. In 1989, Lee received the University of Southern Mississippi Medallion for “outstanding contributions to the field of children’s literature” in recognition of his work; 2009 brought him the National Council of Teachers of English (NCTE) Excellence in Poetry for Children, in recognition of his body of work. In 2010 he received the Florida Libraries’ Lifetime Achievement Award. In 2016, Hopkins received the prestigious Regina Medal award sponsored by the Catholic Library Association. Lee founded several poetry awards, including  the Lee Bennett Hopkins Award for Poetry in 1993 in cooperation with Pennsylvania Center for the Book.


No wonder Lee is, according to Guinness World Records, "the world’s most prolific anthologist of poetry for children.”

Been to yesterdays,
lived through todays.
Looking on toward tomorrows -
new characters, new plays.
The whys of life change,
and so do ways,
new scenery is built,
to fill an empty stage.


Lee has an amazing new collection out this very month: World Make Way: New Poems Inspired by Art from The Metropolitan Museum of Art. 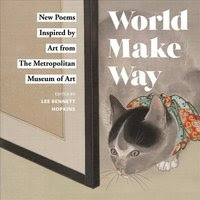 Of all his anthology collections, this is – in my opinion – his most stunning, inspired by the Leonardo Da Vinci quote, "Painting is poetry that is seen rather than felt, and poetry is painting that is felt rather than seen."

As Lee explains during an NPR interview, “… the whole book is really based on a form from the Greek called ekphrastic poetry, where poems are inspired by art. I assigned these varied paintings to 18 of the top children's poets in America who would then write their emotions toward the painting. Rather than describing the painting, it's what they feel.”

The artists represented include Mary Cassatt and Winslow Homer. A painted plaster fragment from Egypt 1390-1353 B.C inspired Irene Latham's "This Is the Hour.” An illustrated manuscript "Book of the Knowledge of Ingenious Mechanical Devices" by al-Jazari inspired Naomi Shihab Nye’s “It’s All Magic.” Marilyn Singer’s “Paint Me”, inspired by Gustav Klimt's " Mada Primavesi, 1912-13," celebrates the painting’s defiant subject with the resolute phrase and title of the collection: “World, make way.”

One of the more dramatic poems comes from Cynthia Cotten, inspired by Rosa Bonheur's oil painting, The Horse Fair.

He calls himself a handler,
this puny person
with his rope, his shouts,
his “I am your master”
attitude.


Thinks he can subdue me,
stifle my spirit,
bend me
to
his will.


But no, I say,
no!
I will not be broken,
controlled,
tamed.


I choose life.
Alone
in the light of my
magnificence,
I will fight
until no fight
remains.

For more history on Lee, check out these interviews with Joanna Marple and Miss Marple Musings interview from 2016 and Cynthia Leitich Smith’s interview from 2009, in which he discusses “... his unflagging belief that poetry is a necessity for children, at home and in the classroom.”