WWW: How to Write a Superlative Mask Poem Even Lincoln Would Be Proud Of 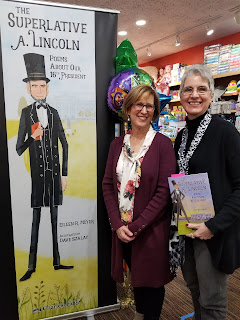 There’s no hiding the fact or masking the truth.  Eileen’s THE SUPERLATIVE A. LINCOLN – POEMS ABOUT OUR 16TH PRESIDENT (Charlesbridge) is garnering superlative reviews.

School Library Journal writes: “An excellent use of language and recognizable rhyme schemes make this title a wonderful teaching tool for the classroom. These well-researched poems hold readers’ attention and could encourage them to explore additional questions. ¬VERDICT A good example of how poetry can also inform. Highly recommended for elementary schools and public libraries.”

Kirkus Review offers: “Telling Abraham Lincoln's story in poetry is a tall order, but Meyer pulls it off. 'Come read about a legend— / the greatest of the greats; / from a poor boy in the backwoods / to a president, first-rate.' The title of each celebratory poem offers a yearbook-style superlative about our 16th president: 'Best Wrestler,'  'Best Lumberjack,' 'Who's Tallest?' Each poem is accompanied by a brief paragraph providing context for the poem. The collection will make excellent reading aloud in the classroom, a few a day. A tip of the stovepipe hat for making a poetry biography so much fun.”

Lucky us!  That above-mentioned stovepipe hat of Mr. Lincoln’s and the mask poem Eileen wrote about it happen to be the stuff of today’s Wednesday Writing Workout.

FYI: THE SUPERLATIVE A. LINCOLN is beautifully illustrated by David Szalay.  Each and every perfectly-crafted kid friendly poem offers a surprising glimpse into an American Hero most of us are mistakenly certain we know fully and is accompanied by an historical footnote.  Think: Distracted Farmer, Best Lumberjack, Least Favorite Nickname, Best Wrestler.  The book’s back matter offers a personal Author’s Note, a timeline of Abraham Lincoln’s life, resources for young Lincoln fans and an opportunity for readers to determine their superlative qualities and/or behaviors.

Scroll down to Eileen’s WWW to learn how to write a superlative mask poem even Lincoln would be proud of, making sure you read to the end.

Thank you, Eileen, for teaching us this poetic form.  And here's to your most successful book yet!

Have you ever wanted to let an object have its say? Or perhaps share the perspective and unique voice of a creature by writing from its point of view? If you’ve harbored any of these thoughts, writing a MASK POEM might be right up your alley. (Note: this exercise is addressed to writers, but teachers may utilize the same exercise in the classroom.)

Mask poems are defined as “a first-person observation, description, or opinion as told by an object or creature” according to the handbook from my first poetry teacher and fellow children’s author, Heidi Bee Roemer.  We just celebrated Halloween a few weeks ago—think of yourself wearing a mask: you are pretending to be something or someone else. Keep that idea in mind as you try your hand at drafting a mask poem.

In my just-released picture book, THE SUPERLATIVE A. LINCOLN: POEMS ABOUT OUR 16TH PRESIDENT, I had a lot of fun writing a mask poem from the point of view Lincoln’s iconic stovepipe hat. Why don’t you choose an object or creature for your mask poem?

Once I chose my subject, I began to think about what the stovepipe hat had to say . . . what was on its mind? I first thought about the hat’s functionality. Many people are not aware that Lincoln’s stovepipe hat served many purposes:

• Lincoln used the interior of his hat to carry important letters, notes, and correspondence tucked into the band. (This habit harkens back to his New Salem days as postmaster when Lincoln took it upon himself to deliver mail to residents who hadn’t picked up mail at the post office.)
• At times, Lincoln used the hat’s flat top as a writing surface.
• And of course, our 16th president’s hat also protected him from inclement weather.

All in all, Lincoln’s stovepipe hat was a pretty handy accessory. But had it ever been recognized as such? What is distinctive about your object or creature? Make a list.

I decided to take the approach that the stovepipe hat was a bit put-off by other carrying devices, such as briefcases or knapsacks (devices that did exist in the mid 1800’s so I was historically accurate), because the hat could handle the function of transporting key documents by itself. That realization also gave me my tone for the poem. It was my “Aha!” moment … the hat was going to be a bit sassy. Frankly, Lincoln’s stovepipe hat had been feeling underestimated and underappreciated for well over a century— and the hat was finally going to have its due!
Now that you’ve made a list about your object or creature’s distinctive qualities or attributes, are there any clues to the message of your poem? And the tone?

The poem I wrote became one of my favorites in the collection. . . but before I share the poem, let me tell you a bit more about the book to provide better context. This will also shed light on the poem’s title.

This picture book celebrates superlatives, which most kids find fascinating. Young readers enjoy learning about who is the tallest, the first at something, or the best at accomplishing a particular milestone. Each story is told through poetry—there are nineteen poems in this 48-page picture book. For example, readers learn why Lincoln was the “Most Distracted Farmer” when he was a young man, that he was known as the “Best Wrestler” in the county, and had the “Most Surprising Friendship” with another famous icon.

Since this poem was about the stovepipe hat, but needed to be titled as a superlative – I came up with this: “Best Use of an Accessory” with a subtitle “Lincoln’s Stovepipe Hat Speaks Out.” With that poem title I was able to achieve a number of things—utilize a superlative form (“best use”) and identify the speaker (Lincoln’s stovepipe hat.) Additionally, the title says that the hat “speaks out”; phrasing that grabs the reader’s attention by stating that this usually silent hat has something important to say. Is there a title that comes to mind for your Mask Poem? (If you can’t think of one, don’t worry. Sometimes it’s easier to come up with a good title once the poem has been written.)

After many revisions and input from the talented writers in my critique groups, VOILA, here is the finished poem: 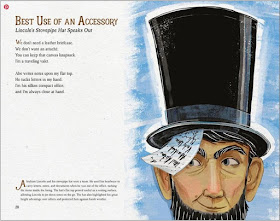